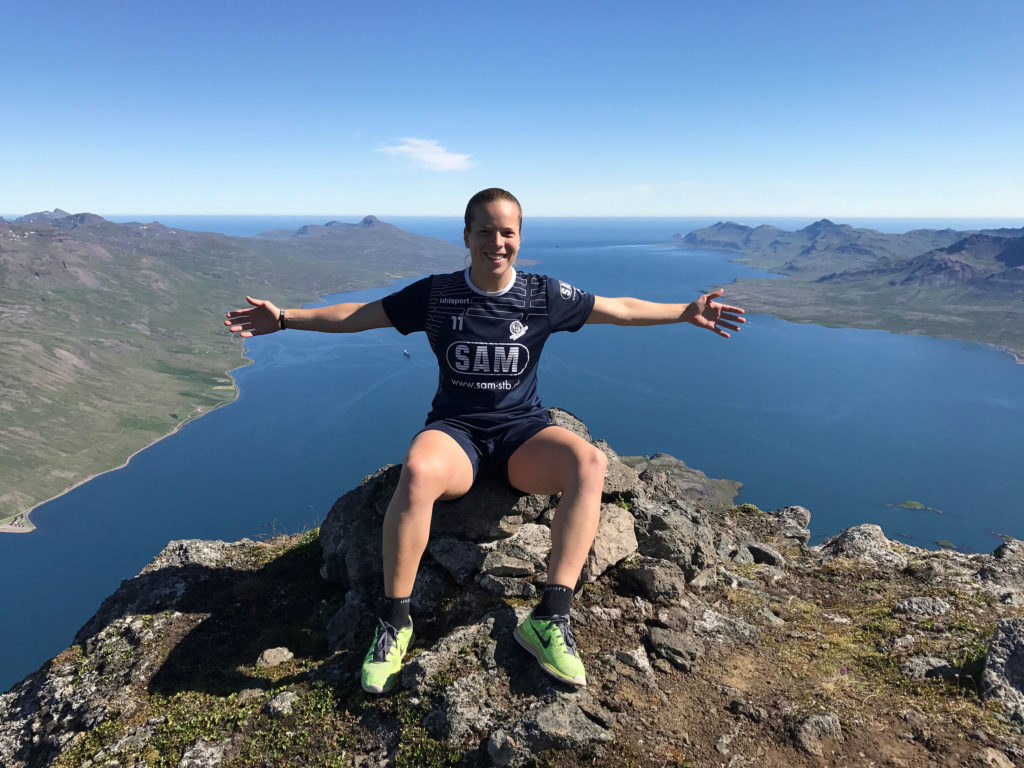 Magic from the midfield

Ever since she could walk, Carina Spengler has been playing football. At VfL Sindelfingen, she is both captain and playmaker. And in the umlaut internal sales team too, she keeps things moving from the midfield.

Carina Spengler digs the studs in her football shoes into the turf and off she goes. She dribbles the ball for a few metres to get past her opponent from Alemannia Aachen, then passes the ball from the midfield out into the path of her striker – who takes the ball, shoots towards the goal and lands it in the net. Goal! 'Way to go!' shouts the umlaut internal sales rep and captain, whipping up the enthusiasm of the Sindelfingen Ladies Team. It's the first round of the DFB Cup. They've had a lot of very close calls with the ladies from Aachen in the second league. Today things are looking different – the team from Sindelfingen are wiping the floor with their opponents and the score is 8:0. 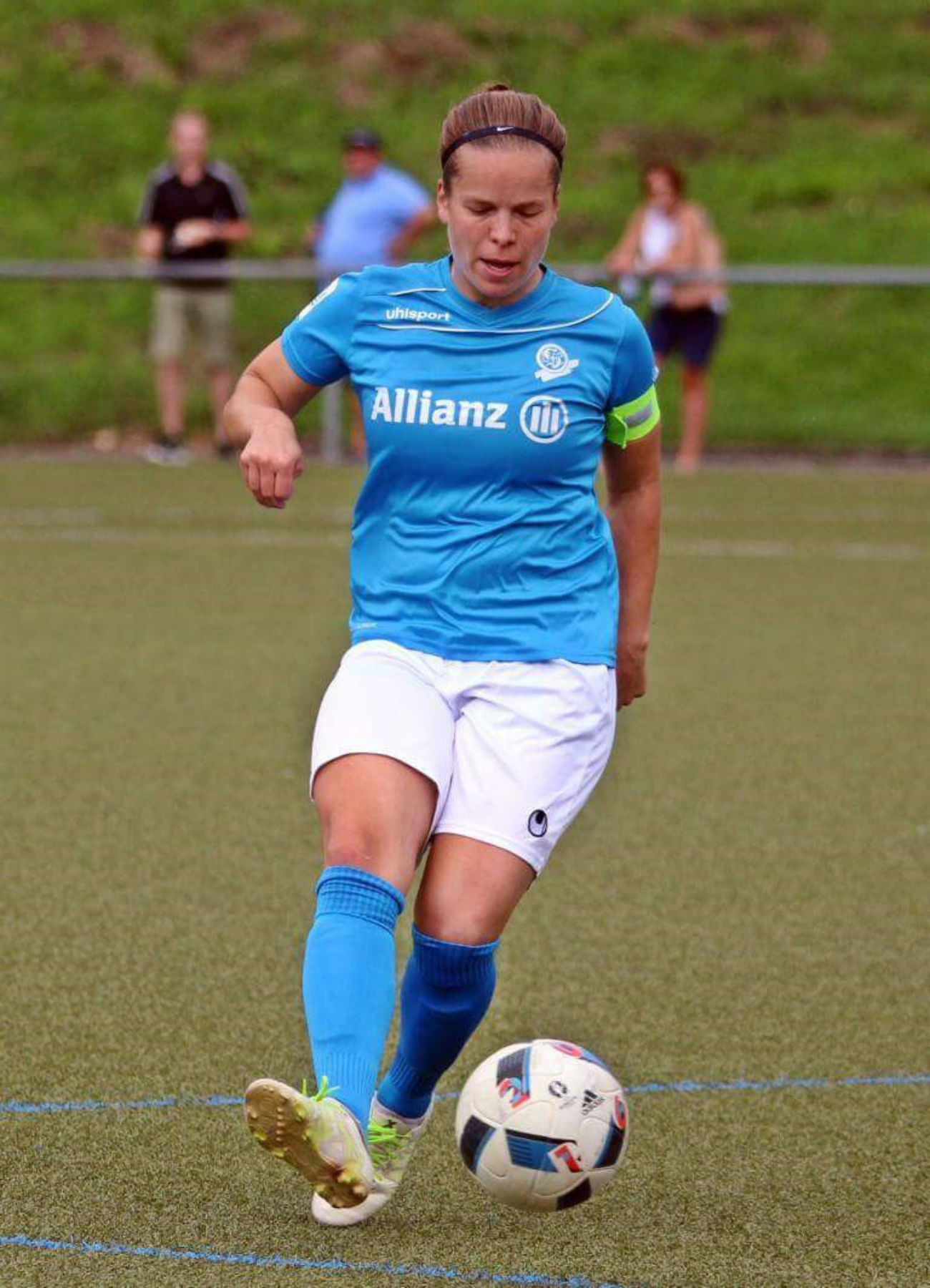 That was five years ago now, but Carina enjoys looking back to the match and the way she set up that goal. The 29-year old is telling the story via video call – her team are not currently playing any matches due to the COVID-19 pandemic. They now play in the Oberliga (Germany's forth division). She misses the thrill of being on the pitch, the feeling of 'whether we win or lose, we do it together'. At work too, a lot of things are different now. Instead of being in the head office in Stuttgart-Vaihingen, she is sitting in her flat in Böblingen, 20 kilometres to the south of Vaihingen. A brightly-lit kitchen with a sloping ceiling, cards and photos on the walls, memories and special experiences playing football, with friends and family.

Carina has been working in the internal sales department at umlaut since 2018. 'In principle, it's a bit like the central midfield of the company,' she says. Together with her six-person team, she provides the necessary support to allow her colleagues at umlaut to focus on their jobs and makes sure things flow well when it comes to planning assignments. Sometimes you'll find her writing quotes and invoices for automotive and testing projects, other times she'll be hunched over revenue plans or writing reminders for tasks that are still outstanding or for payments. 'Many people assume that internal sales is boring,' says Carina. 'Yet we are the ones who have an overview of everything that's going on and we play the balls to the team leaders, heads of divisions and project managers so that we can score goals for the company by working together as a team.' Working in the midfield suits her well. As it does when she plays football.

Away from defence into the midfield

Football has been a defining factor in her life. 'Ever since I could walk, I've been running after the ball,' she says. She first started playing football with her two elder brothers. For a long time they played on the street in front of their house in Böblingen-Dagersheim. Later on, when she was 12, she joined a club and started playing on an actual pitch. After this she quickly rose upwards. Carina dribbled, sprinted and shot the ball in front of selection juries and trainers. By the time she was 15, actually still playing in the U17 team, she was mixing with the ladies in the second division. 'I really blossomed on the football pitch,' she says. As a little girl she was shy, kept to herself. Today she is a self-confident woman who is a strong believer in teamwork. 'When I step out onto the pitch, I know one thing: even if I give my very best performance, really push myself to the absolute limit – I can't win the match on my own.' 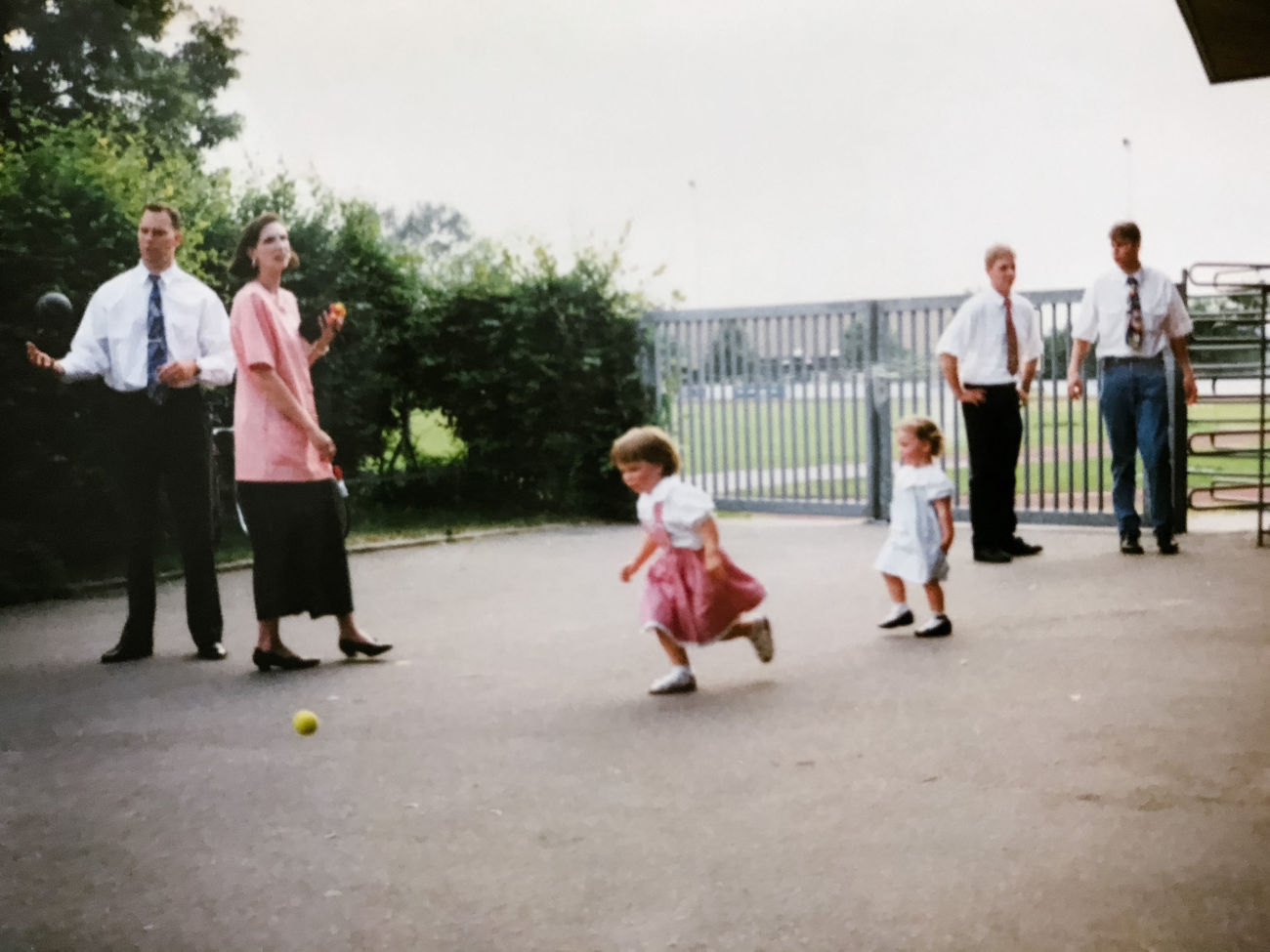 'Ever since I could walk, I've been running after the ball,' Carina says

Before coming to work for umlaut, she spent some time working in project management at the Mercedes-Benz Bank in Stuttgart. But it was at umlaut that she found exactly what she was looking for: a job that is varied, complex and has a strong interpersonal element too. She remembers that they used first names at the interview. 'I like the way we treat one another as equals here – and the fact that I spend so much time working with people. Due to COVID-19, I'm sitting here alone in front of my computer, but I'm constantly in touch with members of the team and I'm connected up to the whole company.' 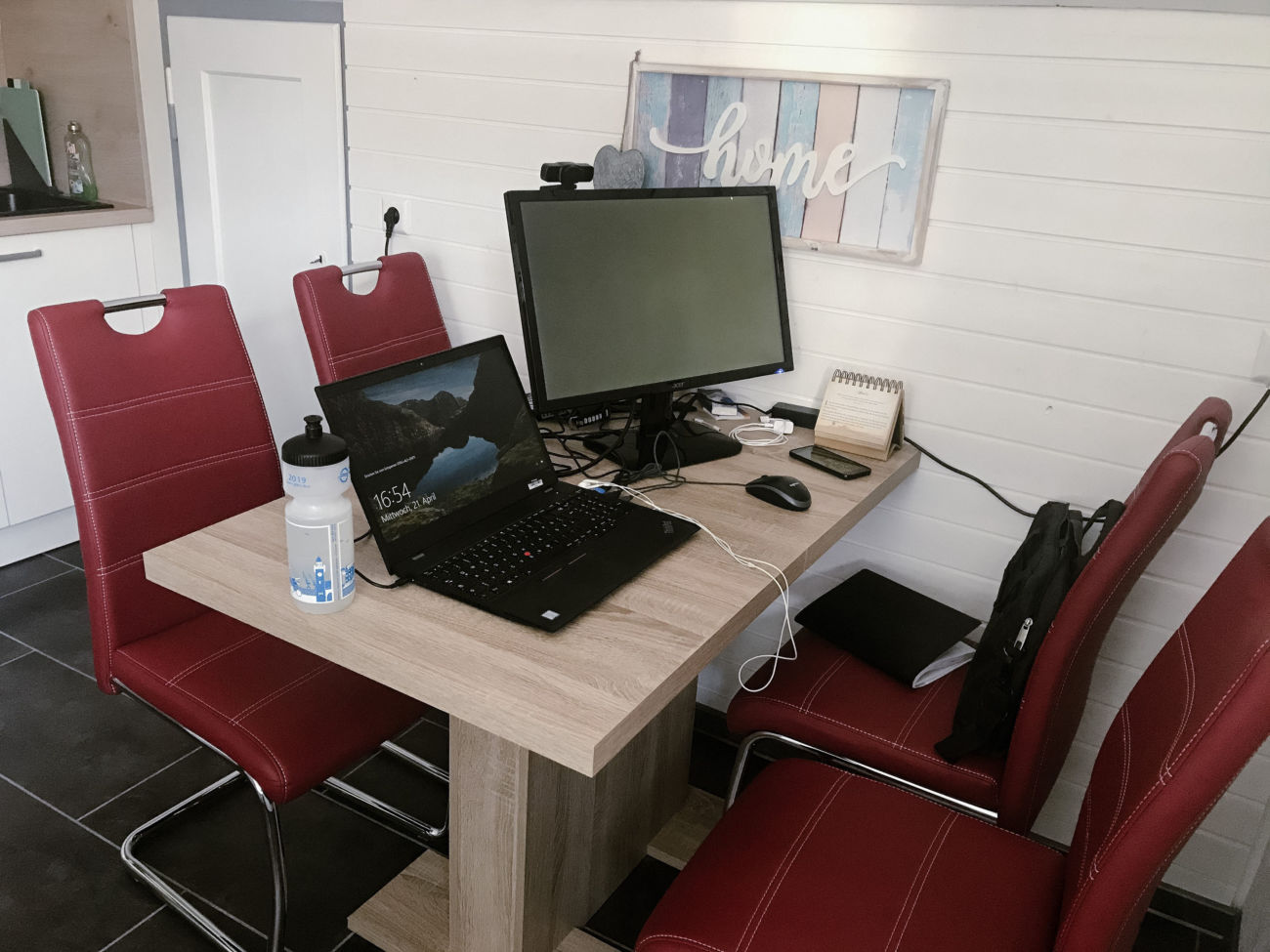 Carina misses her umlaut colleagues and the office vibe

She has a wide social network in her private life too, with friends scattered across the globe. After doing her Abitur (equivalent to A-levels) in 2010, she won a sports scholarship to attend Thomas University in Thomasville, USA, a town with just 19,000 inhabitants in the state of Georgia. Her plan: to study Business Administration and, of course, to play football. 'At first, I wasn't sure whether doing the whole degree in another country would be the right thing for me,' she says. Carina is very attached to her home town – she was born in Sindelfingen and is still faithful to the club to this day. So her initial plan was to study abroad for just one year, i.e. two terms. She ended up staying for the whole degree course. 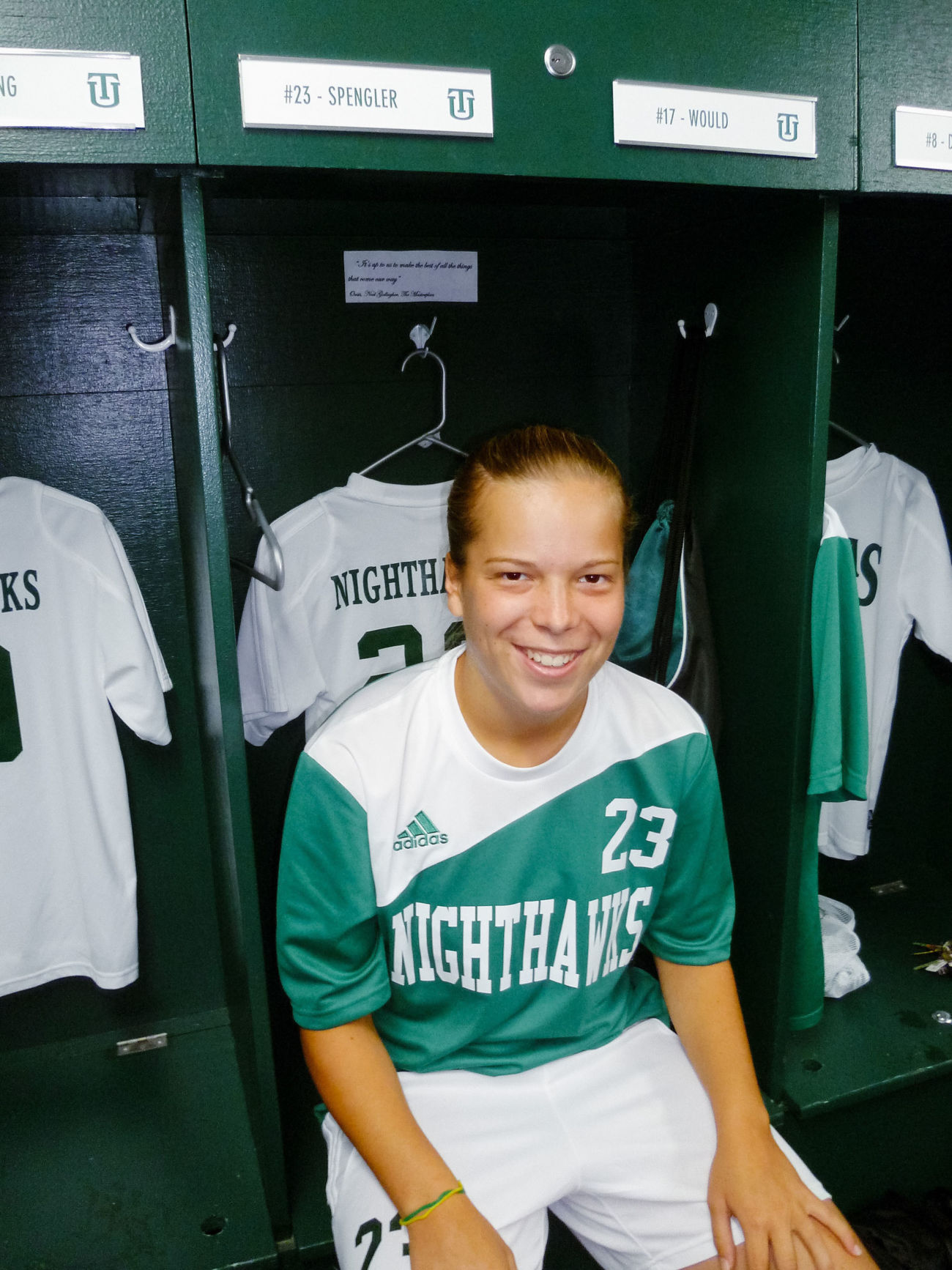 Carina got a sports scholarship to attend Thomas University in Thomasville, USA

'When people really live and breathe sport, it creates a very strong bond.'

What was it that convinced her to stay? The team, she says. 'We were a colourful mix of young women that had been thrown together from the USA, Sweden, Israel, Iceland, Germany and other countries across the world.' They lived, learned, trained and studied together – and soon it felt like a family. After a year in the team she was chosen to be captain. 'It doesn't matter whether you can speak the language perfectly – when people really live and breathe sport, it creates a very strong bond.'

That's how it was in Iceland too. In 2014, having just completed her Bachelor degree, she accompanied a teammate from Iceland back across the sea to the north-western tip of Europe. For two months she played with the KF Fjarðabyggð team – and in 2017 went back again for a season as a player and assistant coach. 'I like the culture there, the contrast to my own home country,' says Carina. 'Things run at a more leisurely pace, they're not as obsessed with hard work and achievement as they are in the South of Germany.'

She is now back with VfL Sindelfingen in the place where she feels most at home. She wants to be near her family again, she says, although she visits her friends in other countries every now and again. In 14 years of playing club sport and a number of years living abroad, Carina has learned a lot of life lessons. She can also make use of her experience in her work in the internal sales department at umlaut: 'In team sport I have learned not to focus too much on my own interests, how to negotiate in an international environment and, of course, how to develop good time management skills.' Sometimes, she says, people ask her how she does it: a 40-hour week at umlaut, training three or four evenings a week, and then playing matches at the weekend too. 'But I've never had it any different.' 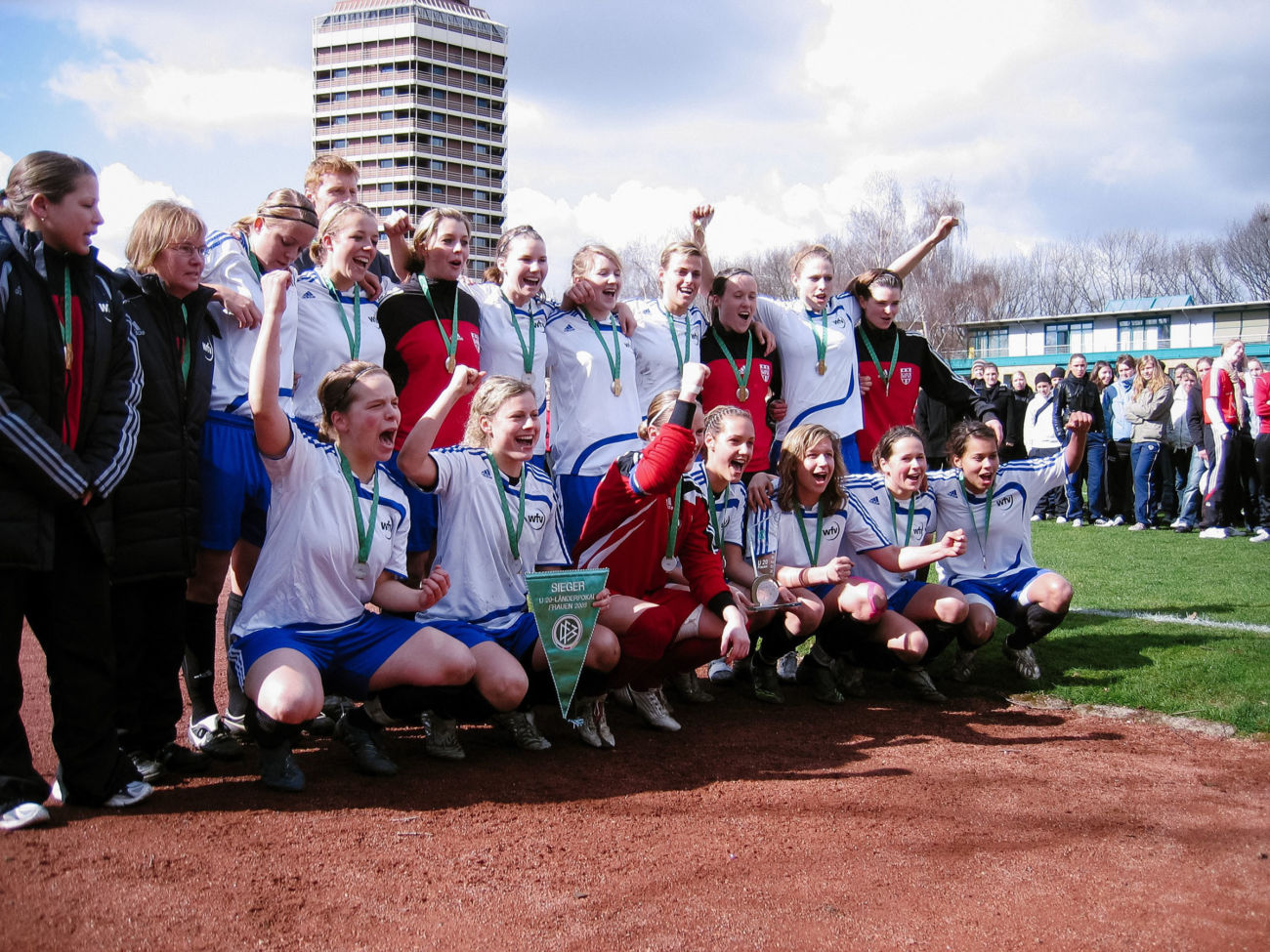 Currently she meets up with her teammates via video call to work out. This means of course that everyone sweats for themselves. Instead of doing sprints and practising goal kicks together, they do sit-ups and knee bends on the living room floor. Soon they should finally be able to return to the pitch again. 'And hopefully things will get really exciting.' The best matches, Carina tells us, are the ones where they have to fight until the very last second. The ones where they win 2:1 in the 93rd minute. Matches with opponents who play at the same level as them – and with a really strong team.