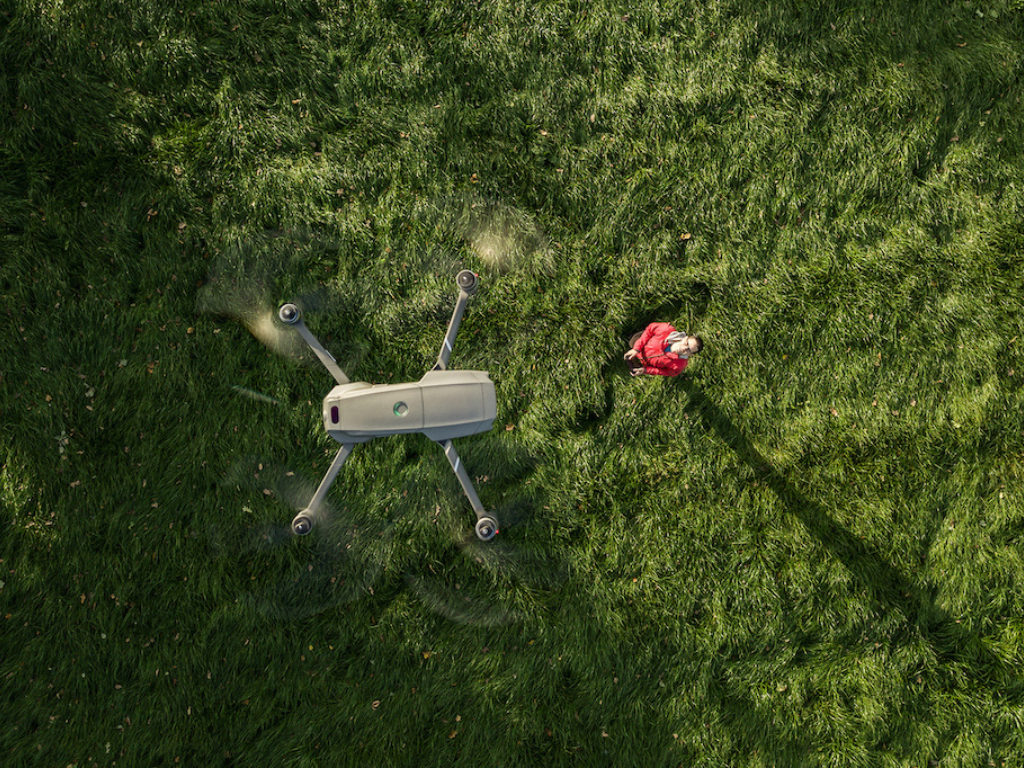 It’s probably the most climate-friendly way to fly. The drone’s rotors waft a circular clearing in the grass around the pale blue launch and landing pad, then Jan Ivo Springborn takes off. In a sense, at least. Physically, the umlaut consultant is still in the field, a tall man, early forties, lean, red outdoor jacket. In spirit, though, his head’s in the clouds. Because a camera is transmitting the live image from the drone directly to the VR goggles in front of Ivo’s eyes: “At least a little bit like flying”.

Sustainable aviation, with battery power in place of internal combustion engines: as a mass application, it only works virtually for now. Ivo calls his drone “a toy for grown-ups”. But it’s got good prospects: “I’m still fascinated by how fast this technology arrived in the consumer market – and how few industrial business applications there are to date”. 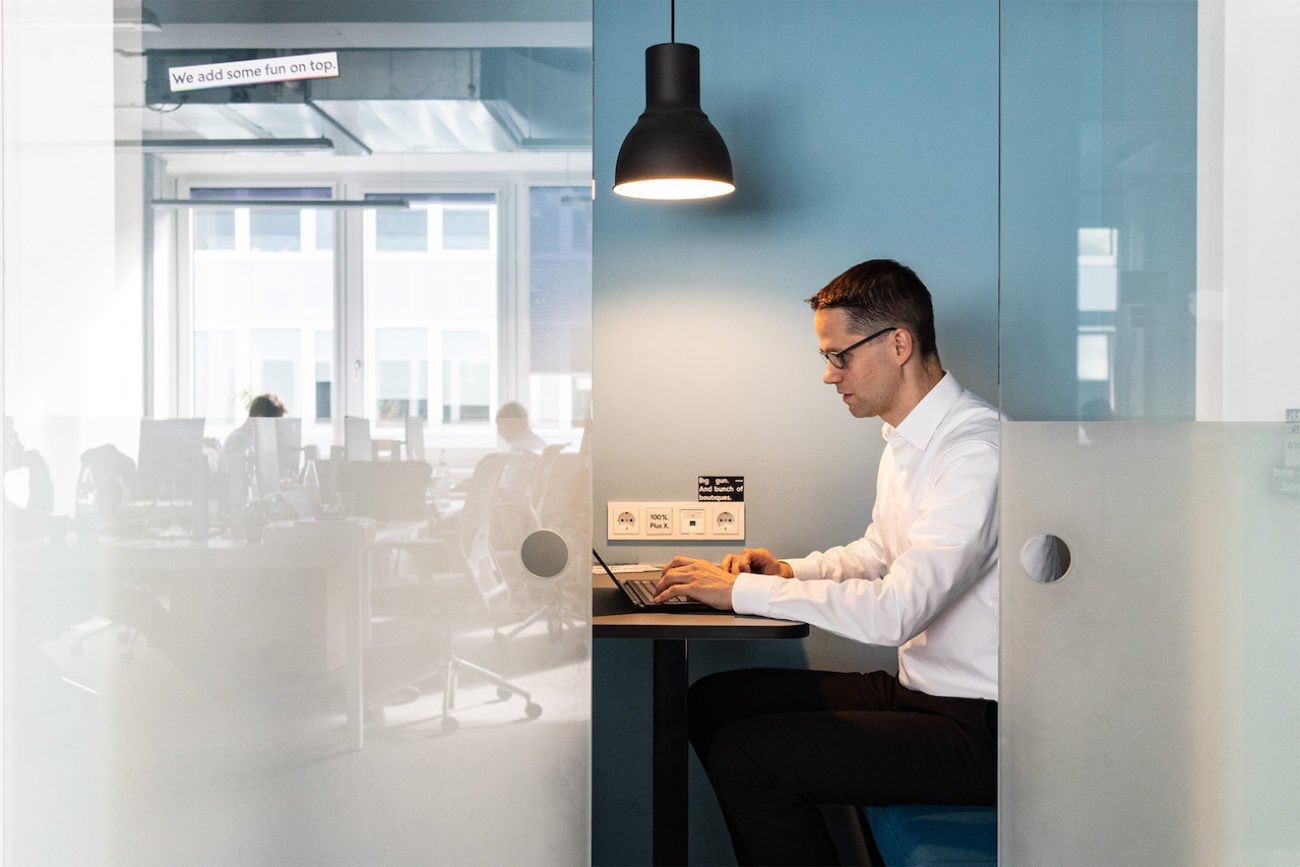 That is to change. Because Ivo is not just an inventive drone fan – he’s also a configuration management consultant and aviation expert with umlaut. As part of the company, he champions innovative drone projects, battles with complex cable spaghetti and explains the connection between an A380 and washing machines. A deep dive into his profession and vocation seems indicated: we spend two days out and about with Jan Ivo Springborn.

First stop: “Channel Harburg”, umlaut’s site in the south of Hamburg. Ivo needs even less room for workspace than for his drone’s landing pad: a laptop, a smartphone. “I’m pretty digital,” he says and grins. You’ll find Ivo with this set-up on the lounge sofa in the Work Café, at one of the pool workspaces or in the CEO’s office. The latter, too, is away a lot and ready to share. Ivo spends most of his time out of the office anyway: at umlaut key account Airbus in Toulouse, for example, but also at other projects or – thanks be to Cloud – in the home office. 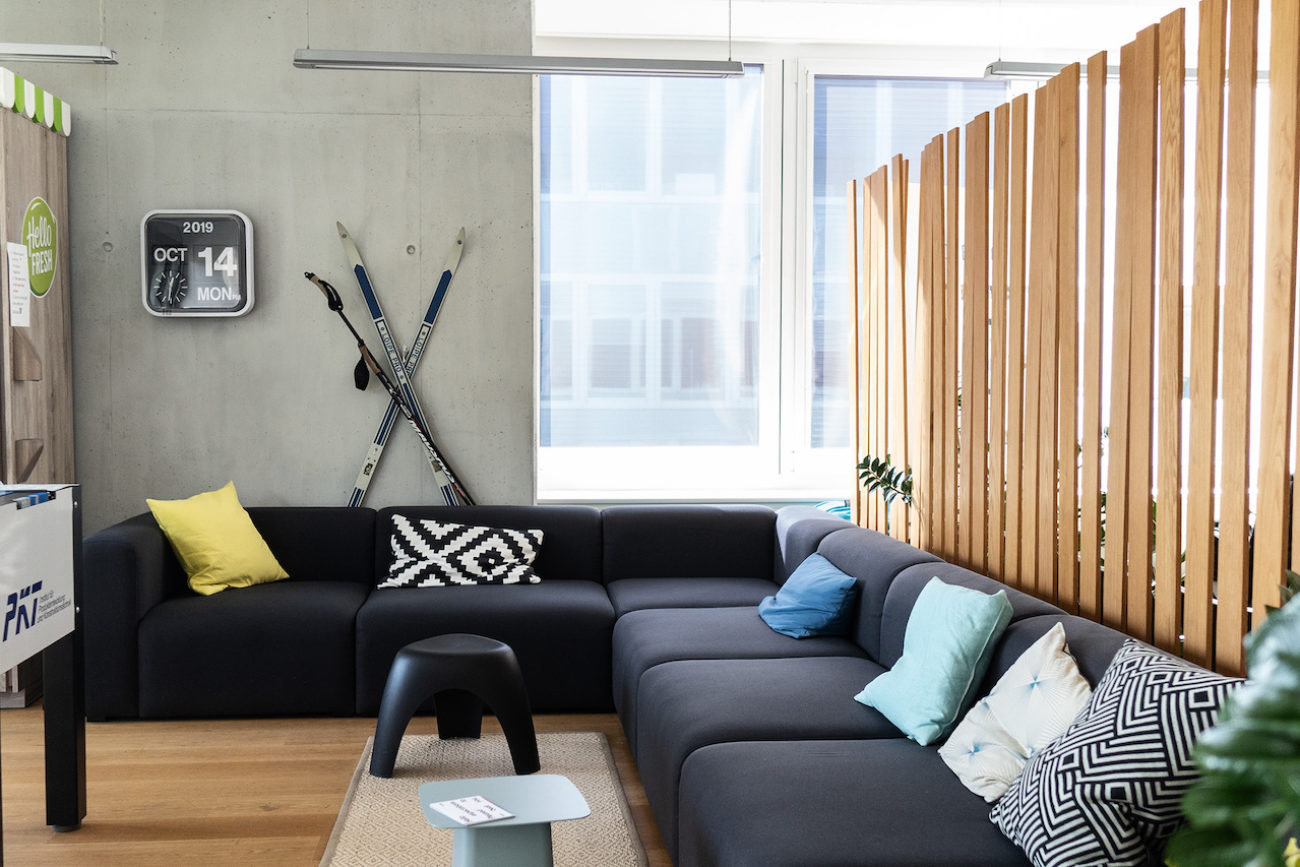 It was the combination of economic security and professional variety that took him to the company almost 13 years ago: “I’m basically a handyman,” he says. That’s in a pretty broad sense of the word: he’s built a pretty impressive tree house in a white willow tree for his three kids. While writing his PhD at the Institute of Applied Physics in Hamburg, he made a sensor head to track electron movements.

He took two things away from his time in research: “Don’t be scared of complexity! You learn to dig deep into topics and keep the overview at the same time”. And: “You reach the limits of what you really know pretty quickly”. Nowadays, he has a sticker on his laptop: “Hello expectations – pleased to beat you”.

Lord of the cable spaghetti

Digging in, sorting out, keeping the overview – that’s basically still Ivo’s job. It’s just that he doesn’t track electrons any more, but, for example, many, many wires. Around 500 kilometres of cables are installed in an Airbus A380, the configuration varies depending on what the customer wants. When Ivo joined the project, the daily newspaper Frankfurter Allgemeine Zeitung was carrying reports about “cable spaghetti” – because the engineers had lost the overview in the course of the design process.

The solution to the problem grew into a whole discipline, known as “configuration management”. Ivo leads this centre of competence at umlaut. The approach is always similar: reduce complexity wherever possible – and manage complexity efficiently where it can’t be avoided. “It’s like when I tell my kids: tidy up your room, then you’ll be able to find everything. But if you’ve got the chaos in your wardrobe under control: fine by me”.

The principle works in a kid’s bedroom and at Airbus as well. Consultants from umlaut are still taking care of the transnational company today. But it can be transferred to even more things, as Ivo says. Washing machines, for example: “The drum always turns the same way, but the controls change every year. I don’t have to reinvent the whole washing machine”

Launchpad beside the molehill

Ivo relaxes from modularisation and change management half an hour or so out of Hamburg. Motorway exit Pinneberg-Nord, a bit of country road, then you’re surrounded by molehills and rabbit cages. A spotted woodpecker pecks at a fatball, Ivo strides across fields that belong to a farmer friend. In his own garden, he only has a robot lawnmower doing its rounds – he doesn’t want to cause the neighbours nuisance with flying drones.

Ivo has swapped his management consultant’s suit and white shirt for a long-sleeved tee-shirt and jeans, pulls a Maverick drone from his backpack. He opens the wings with a couple of twists and sets the drone down on the pale blue launch pad. A quick glance at the remote control: calibrate compass. That manoeuvre calls for a little dance. Turn the drone around three times, first horizontally, then vertically. Half a minute later it rises into the evening sky.

It’s not so much the flying that fascinates him, Ivo says – “it’s mainly the technology”. Even as a youngster, he used to fly model aeroplanes a few streets away. “Back then, electric propulsion meant a car battery and a long cable”. Meanwhile, the trend has been reversed: in commercial applications, virtually all drones fly on electricity – and weigh up to 150 kilos. “That makes the leap to an air taxi that weighs maybe 500 kilos not that big any more”.

The future is electric

So soon we’ll all be flying on electricity? Ivo’s too much of a scientist for that much optimism. “Sustainable air traffic is a gigantic challenge”. Airbus is currently testing the “E-Fan X”, a regional jet in which an electric engine replaces one of four megawatt turbines. Ivo is involved in the configuration management as a consultant. “In my opinion, hybrid technology will be relevant within the foreseeable future – but right at this moment it’s still absolutely in the test stage”. 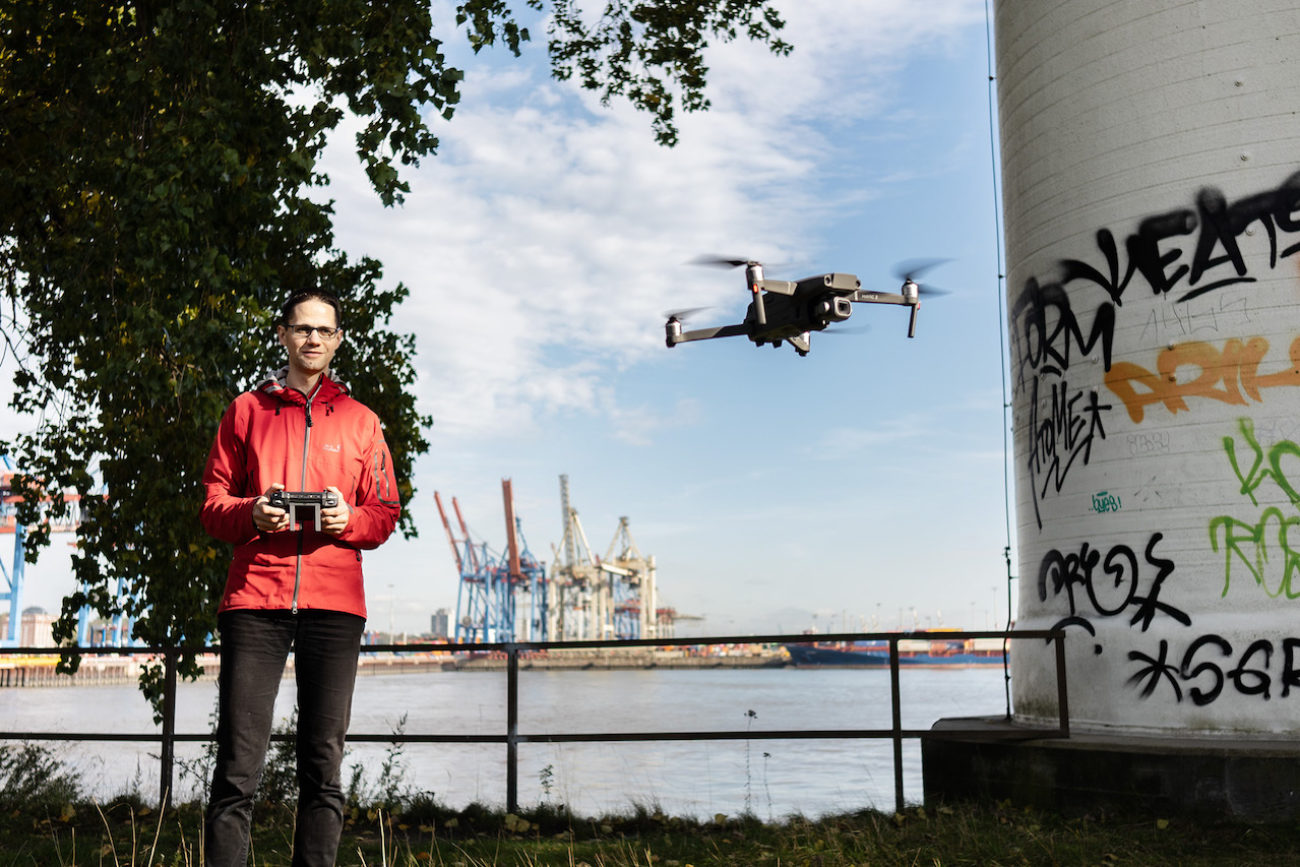 The technology is applied more with drones – that’s an area where Ivo’s profession and passion already coincide today. Drones measure the mobile communication network coverage for umlaut’s connect test. A rescue drone is being developed, docked onto an existing medical technology start-up within the corporate group. The flying device will be able to establish a wireless connection with a doctor or even transport a defibrillator. From next year onwards, new EU directives will apply, then drones will be able to fly autonomously and out of sight for the first time, under certain conditions. “That opens up even more possibilities”. Taking automated traffic flow measurements, for example. “Or servicing electricity pylons,” says Ivo, pointing to the line in the distance. He’s not entirely detached from his work, even when pursuing his hobby – it doesn’t take you long to grasp that. After all, ideas are irresistible. 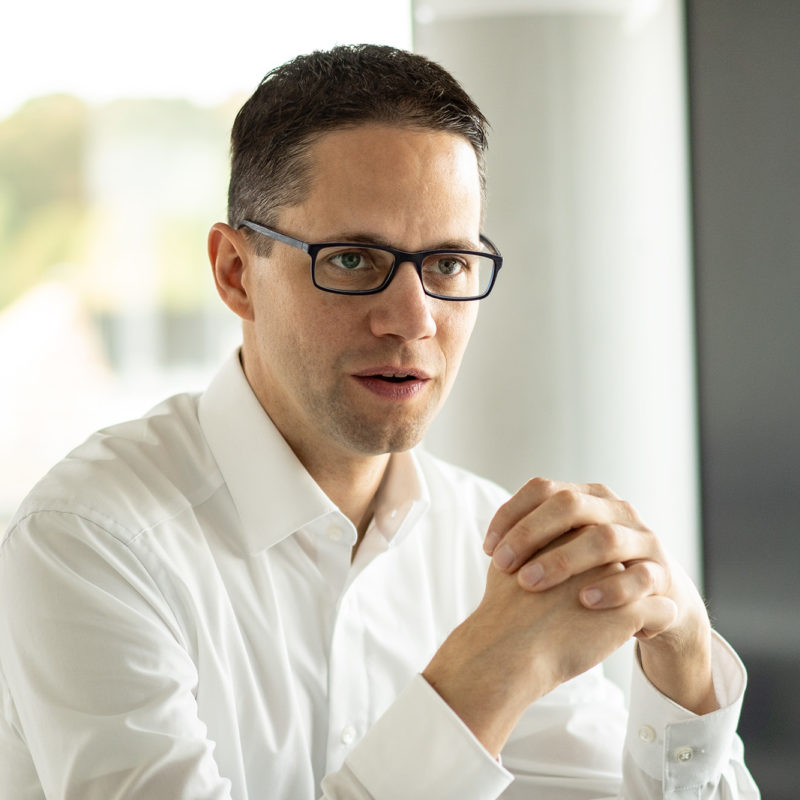