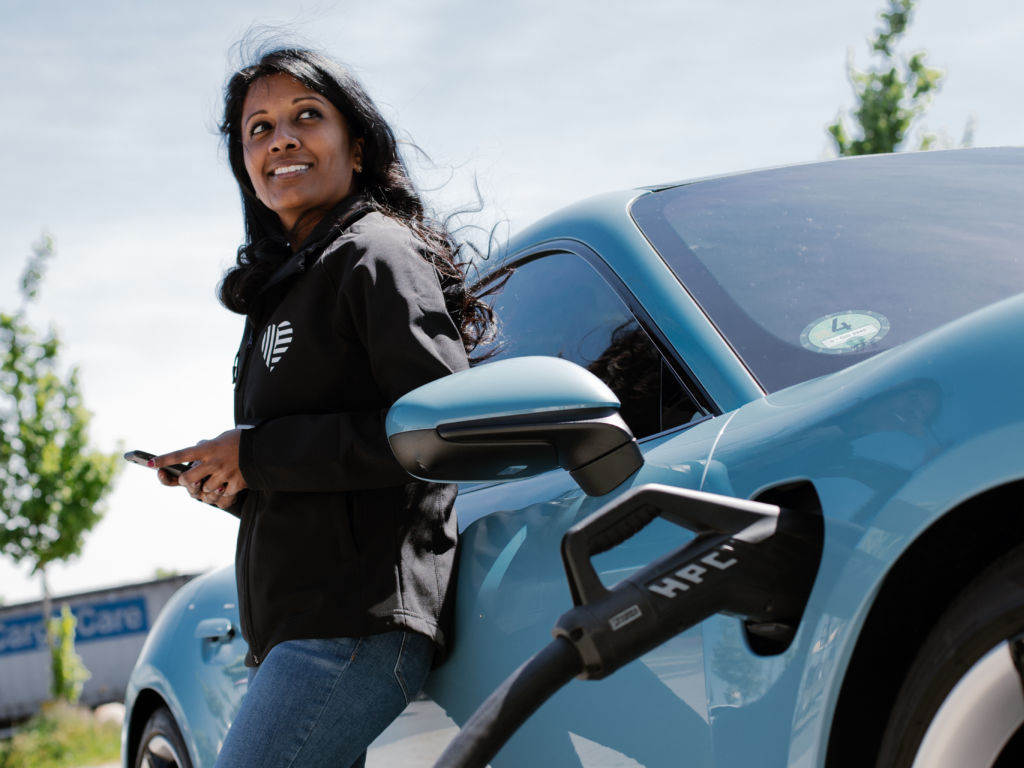 Click, clack. Unlocked, locked. Click, clack. Unlocked, locked. In a car park in the south of Germany, where the motorway makes a loop around the medieval town of Landsberg am Lech, a woman is standing in front of a large, white SUV. In her right hand, she is holding a smartphone, and she is pressing the screen with her thumb. Click. Doors unlocked. Again. Clack. Doors locked. 'Well, that all went fine,' she says. 'Now let's see what else the car can do.'

Darani Yogalingam is an industrial engineer who is specialises in automotive engineering and a consultant at umlaut. Among her various roles, she works for a leading manufacturer in the semi-conductor manufacturing industry. Her main area of expertise is process and cost management – when she isn't on the road driving across Germany.

On the road in an all-electric Porsche Taycan

Because once a month it's test drive day. One month you'll find her driving a turquoise Porsche Taycan across Germany to find out how well the charging infrastructure works (it works, but we would rather do a few extra tests anyway). The next month she'll be sitting in a luxury SUV, scrolling through the vehicle app – connectivity, user friendliness and convenience are all on the test sheet.

Like today: Darani pushes back the seat, sets up her laptop and opens an Excel spreadsheet. In the spreadsheet: the various different categories in which an SUV can score points. Provided the technology is in place and is working. App and smartphone, navigation, productivity, convenience, entertainment, extras, communication, voice control – Darani enters the relevant values in all eight categories.

First of all, Darani opens the app on her smartphone and checks whether status information such as the charge status, range or tyre pressure of the car are listed there. It works. Then she checks whether the app is displaying the car’s location correctly and is providing information about the surrounding area. Are there any petrol stations nearby? Car parks? Repair shops? It works. Finally she starts the navigation system with the function "send to car": Darani types an address into the app. The app connects with the car. The address pops up on the SUV's display, and then it shows the route. It works. 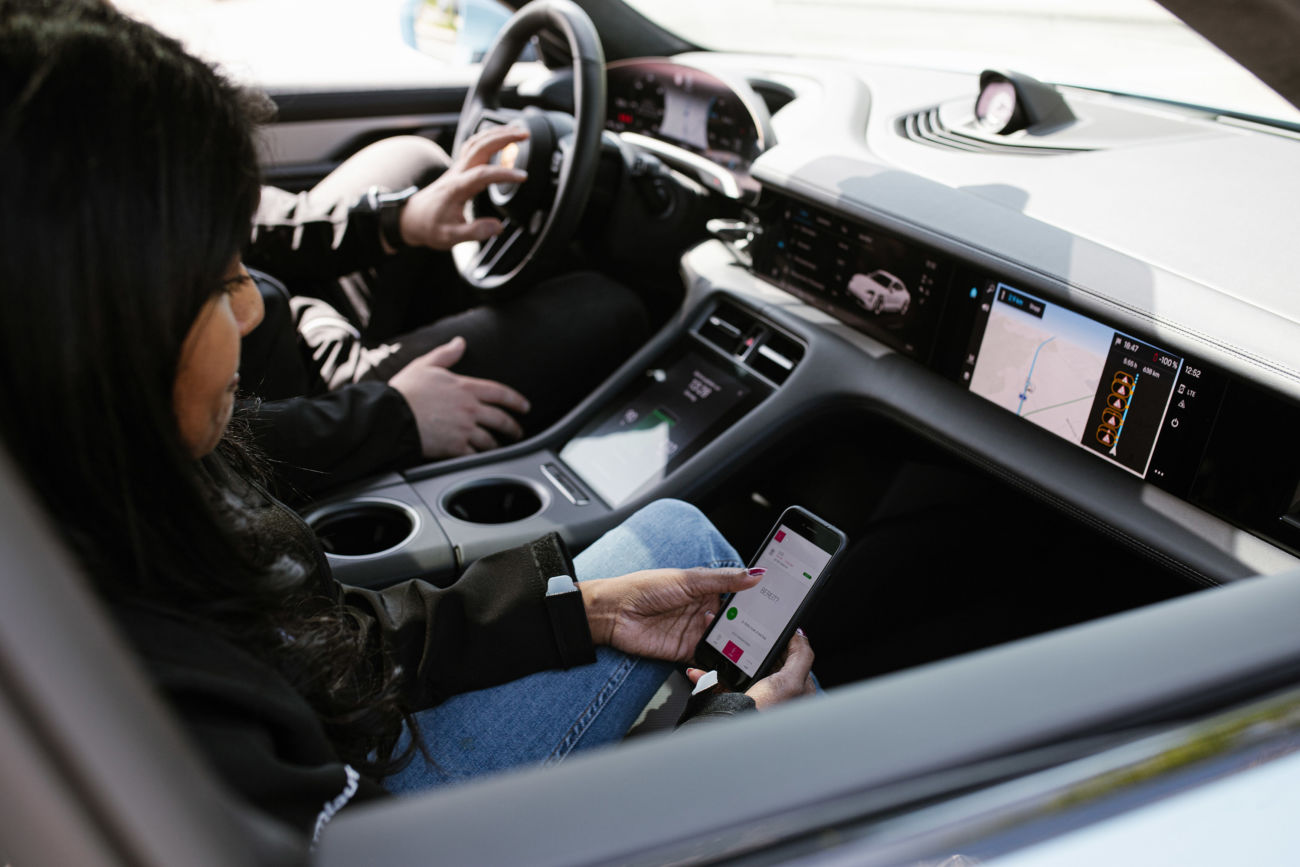 The app helps to keep track about charge status, range or tyre pressure of the car.

The evaluation of the test results will be done later, sometimes in the evening, sometimes at night. 'You could say this is my hobby at umlaut,' says Darani and laughs. And if you need to ask why she does this, you have failed to understand one key thing: Darani Yogalingam loves cars.

Test drive into a job

Her father gave her his old Golf Mark III estate just a few days after she had passed her driving test. 'That was quite an adventure,' says Darani, looking back – once again she has to smile – but from then onwards, she was proud to drive it to school every day.

What started out as an adventure in her youth developed over the years into a total fascination with technology. The longer Darani had been driving and the more she understood about cars, the more her interest in the processes behind them grew. After completing her degree in industrial engineering, she did a Masters in "Automotive Engineering & Management" at the University of Duisburg-Essen.

Her fascination with the automotive industry developed further through an internship at Daimler during her Bachelor degree course and numerous "test drives" in cars belonging to her friends – 'Whenever anyone bought a new car, I always wanted to drive it straight away,' she says. Even though her work increasingly started to focus on project and process management, her passion for cars was still just as strong. 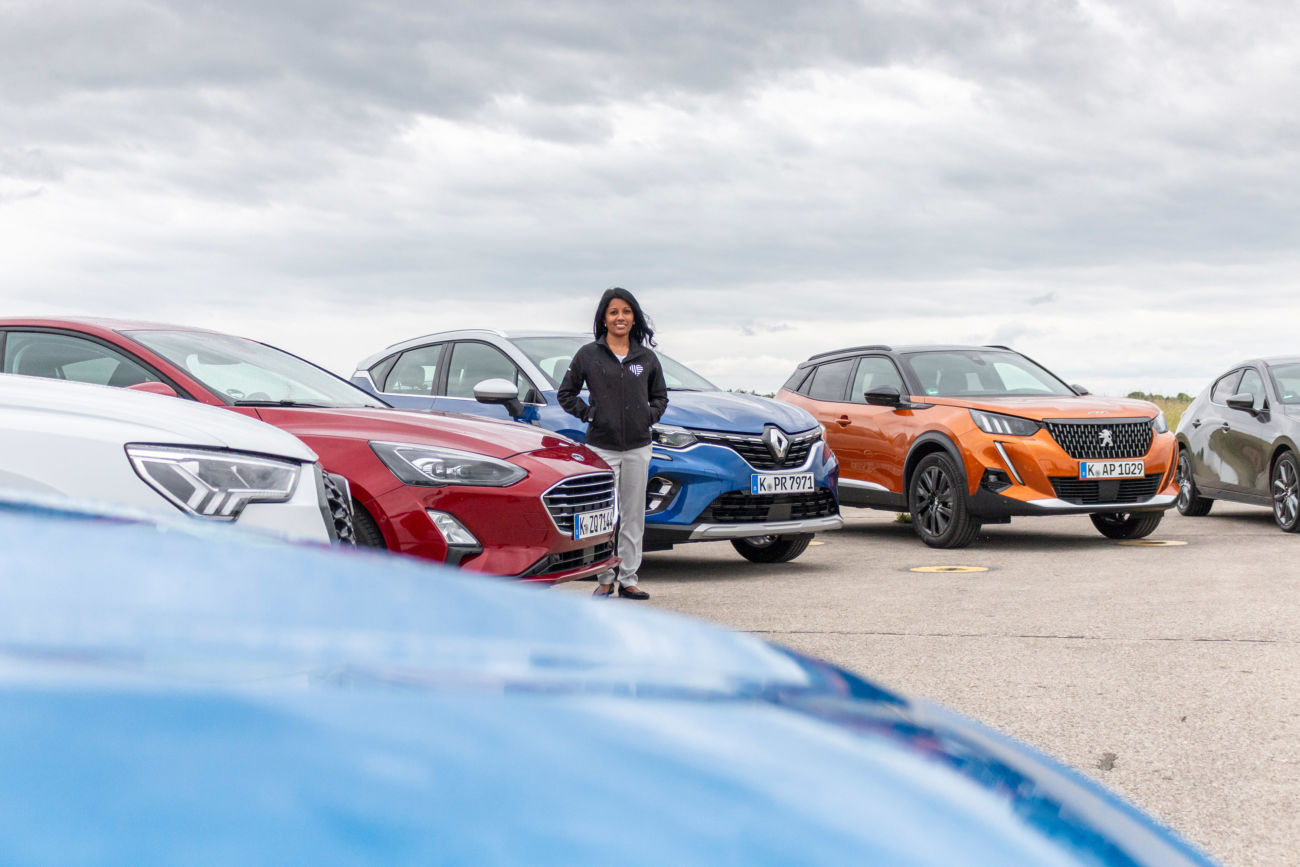 Darani manages a testing project in a collaboration with the magazine "connect".

This is also due to the fact that technology is currently advancing in quantum leaps. 'In more expensive cars, this can be seen quite clearly – in this segment, for example, the latest mobile phone technology is in widespread use,' says Darani. Many new vehicles now communicate with the driver's smartphone, some automatically connect to the internet and play music, others are able to independently find a parking space. 'Most cars do really well.' Today, however, she is test driving a compact class car for the first time – 'cars that the general public can afford'.

Darani has a lot of understanding for the requirements of frequent drivers. The main residents of her two-room flat in the centre of Aachen are a couple of plants. 'I used to have more of them,' she says and laughs – the only ones that survived are the ones that don't need watering often. She has to travel a lot for her job as a consultant. Usually four days a week – from Monday to Thursday. She normally makes the journey of up to 500 kilometers by train, for the sake of the environment and also because it's easier to work on a train. 'But I do enjoy driving when I get the chance,' she admits.

The test drives are therefore very opportune. 'When I interviewed with umlaut, I told them that I would be really interested in doing something in the digital automotive field,' she says. Shortly afterwards, the company asked whether she would like to help with testing. She agreed. Five months later, in October 2019, she took over management of the testing project, in a collaboration with the magazine "connect", in addition to her role as a consultant to customers. Preparation, coordination, evaluation – a pretty sizeable package. 'I do of course give up a bit of my free time for this, but I don't mind, as I enjoy it,' says Darani. 'It's something I really love doing.'

Then she starts the engine and rolls the car across the car park, slowly and deliberately. Perhaps for the benefit of the journalist who is standing there watching – sometimes, Darani tells me, she sings loudly in the car and does a few dance moves too. 'But only when I'm driving for private use.'

A glance to the right and to the left, then she turns into the road. During the journey, she makes a couple of test calls via the car – breakdown service, emergency call centre. 'They know to expect our calls,' she says. 'We always give them a warning first.' In the evening, Darani arrives at the last car park of the day; the car has brought her to the correct destination. Darani takes her laptop from the passenger seat and types her marks into the spreadsheet. She is satisfied. 'The car did surprisingly well, better than expected,' she says. Then she closes her laptop – and gets ready for the best part of the day: the journey home. 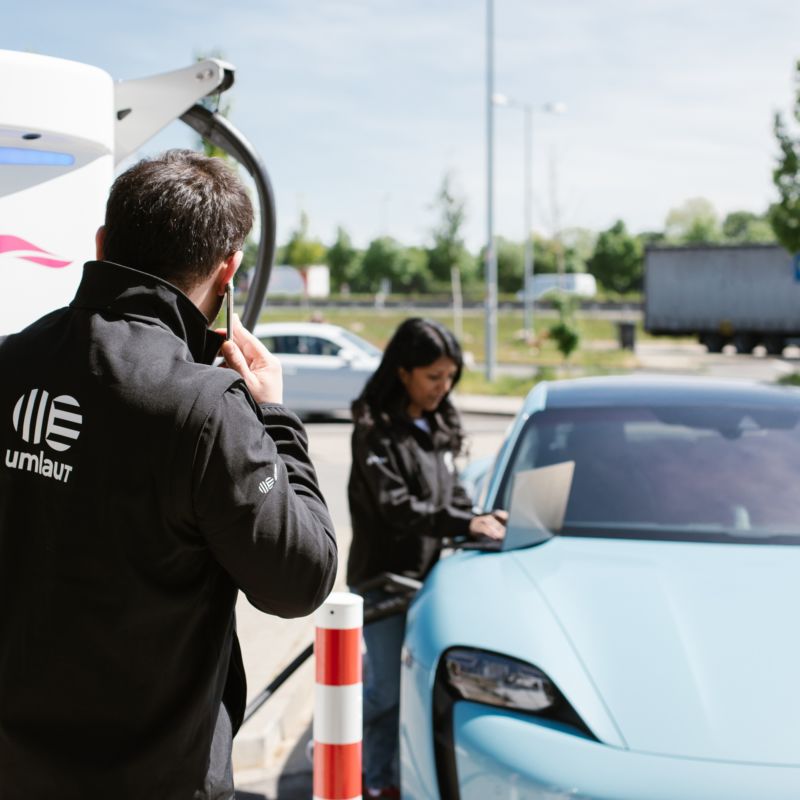 Testing e-mobility in cooperation with connect 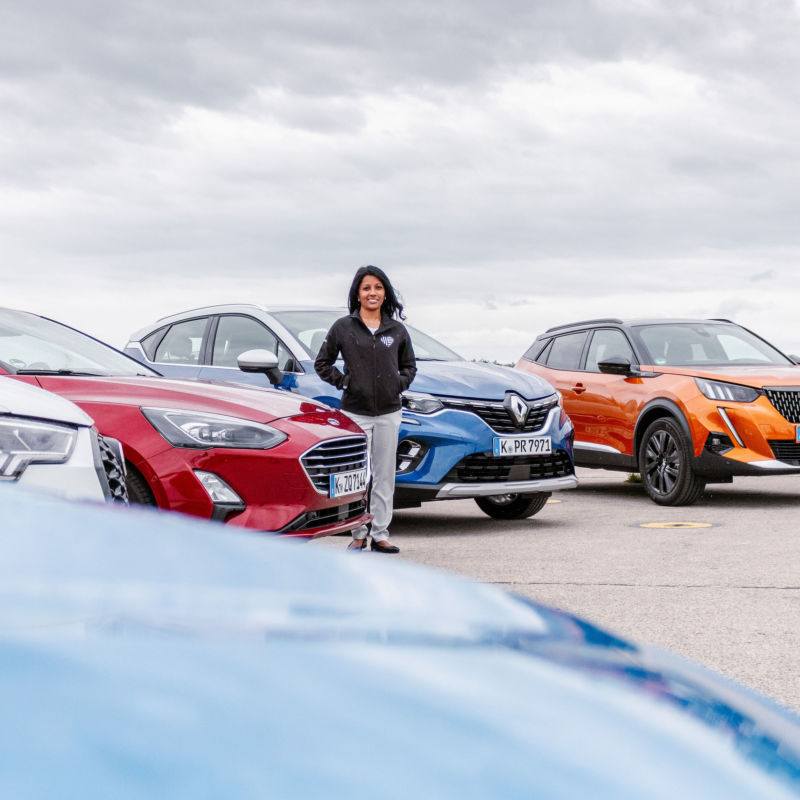 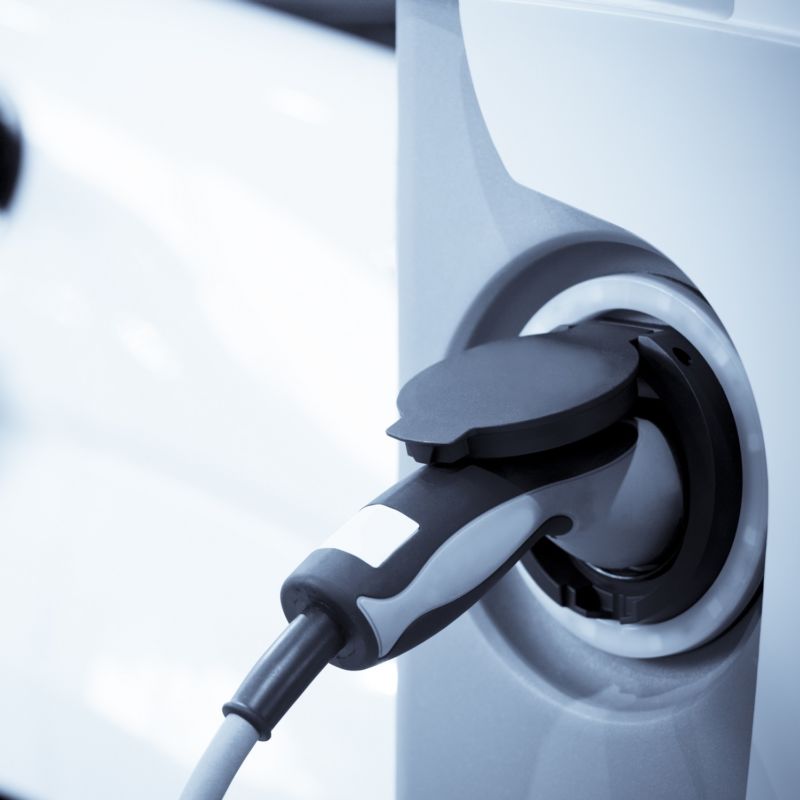 "Each charging park is one of a kind"

Sören Schrader and Roman Scholdan on the integration of eMobility into the electric power grid and decentralised concepts for charging infrastructure.

Sören Schrader and Roman Scholdan on the integration of eMobility into the electric power grid and decentralised concepts for charging infrastructure. 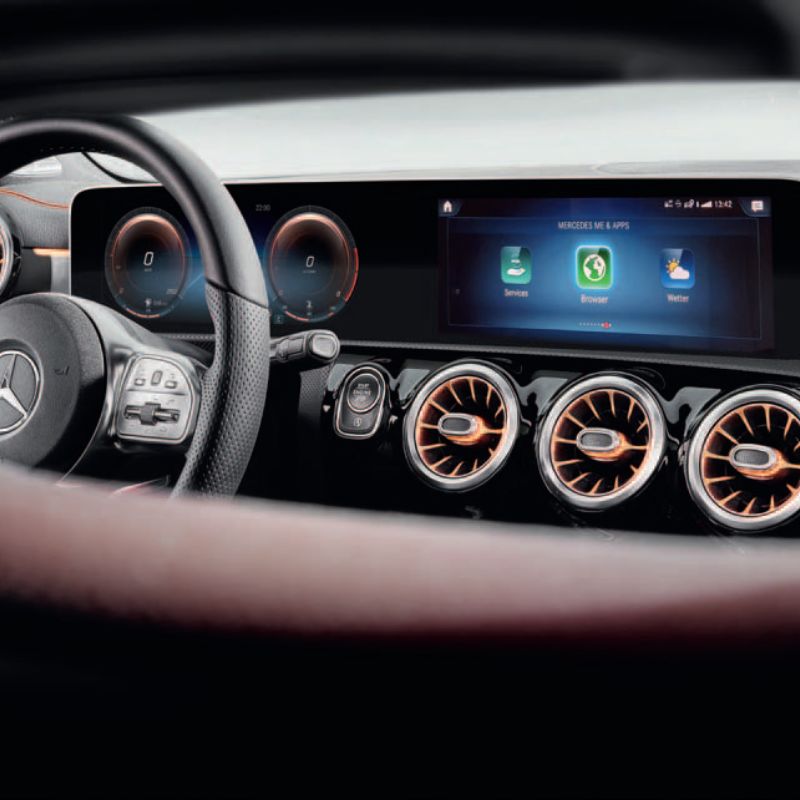 03/2020 -Which car models are ahead in terms of infotainment, navigation, connectivity and user experience?

03/2020 -Which car models are ahead in terms of infotainment, navigation, connectivity and user experience? 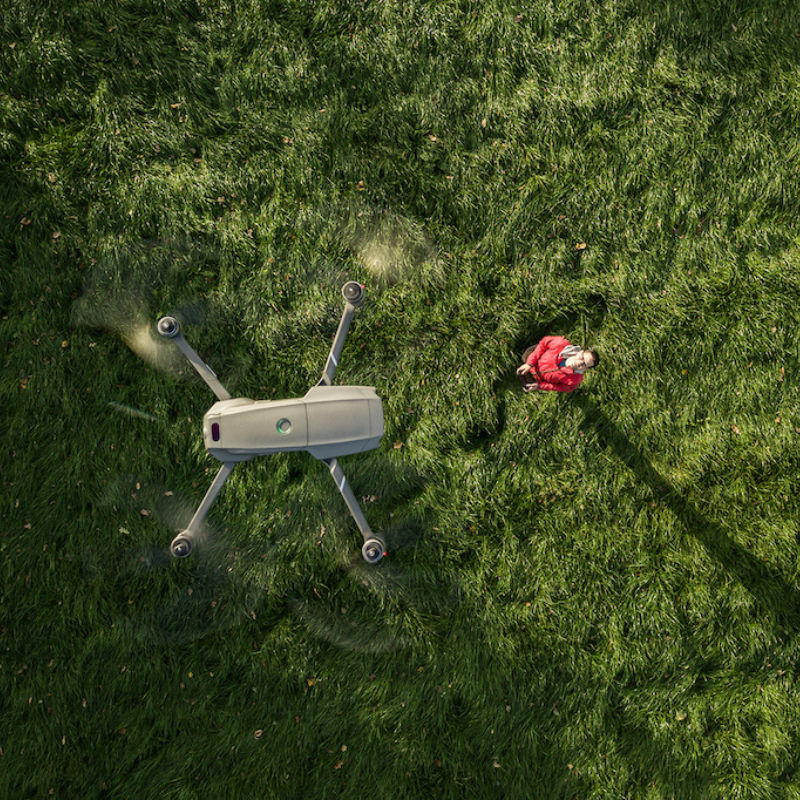