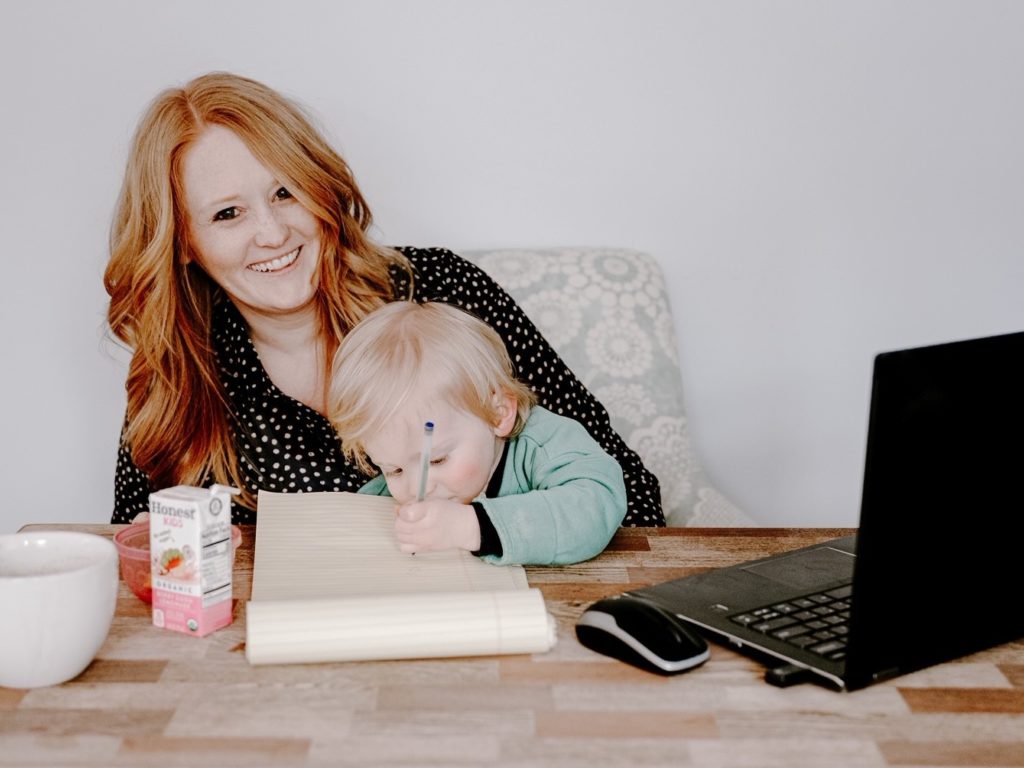 Child or career? umlaut manager Brittany Cycholl has both. We pay a visit to a lady who wants to push ahead with change – and is encouraging other women to do the same.

It’s still early in the morning, shortly before 7 am, and umlaut manager Brittany Cycholl is sipping on her first cup of coffee. The day is about to take off, and quickly – As Head of the Change Management team, she has been working towards the upcoming weeks for months now. These are the weeks that will provide direction on her project. Will the new company software work? Will the technology function without any issues? A few hours from now, the dress rehearsal will start via video chat. More than 300 selected umlaut employees from across the world will begin testing the ERP system to understand how it can support umlaut’s future daily business processes. ‘That’s the plan’, Brittany declares.

‘The new company software will make a decisive improvement to our work at umlaut,’ Brittany exclaims. The project itself focuses on an Enterprise Resource Planning tool, which is a modular software solution for resource planning. Invoices, scheduling annual leave, HR, and financial planning – these processes have been centrally defined and are the future of umlaut. ‘This should simplify our procedures,’ says Brittany. And it will solve a critical problem: up until now, umlaut has been using roughly 150 different toolsets worldwide. They all work differently. ‘It’s as if we are all speaking different languages,’ she says. Brittany and her team are helping to change this, while also working to maintain the corporate culture: short communication channels and flat hierarchy structures between employees. After all, they are the ones who drive umlaut forward, not the tools or KPIs. This is no easy feat, but Brittany enjoys monumental tasks. ‘When I set goals for myself, I reach for the moon!’ 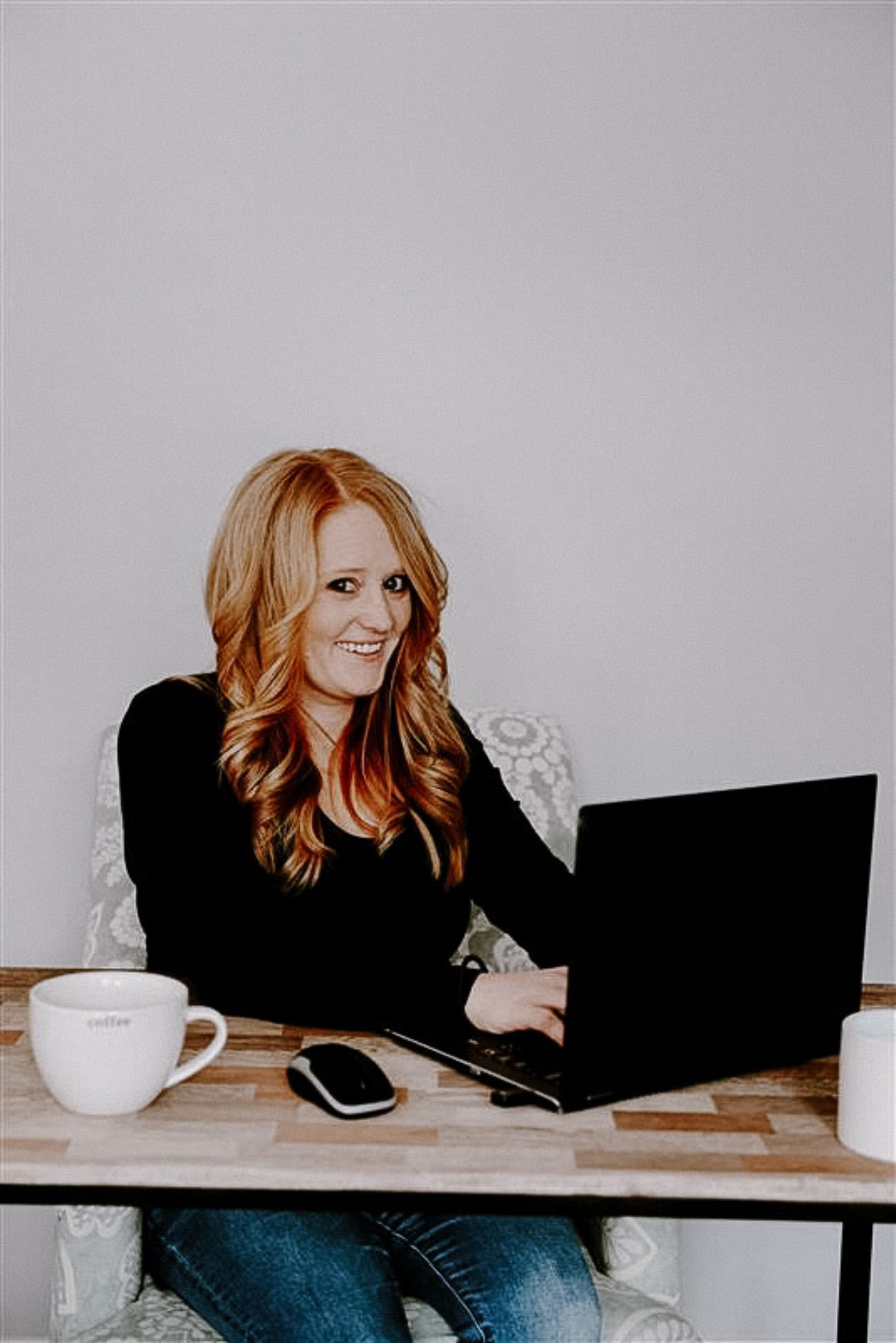 As Head of the Change Management team, Brittany is in charge of all Change, Communication, and Training throughout the implementation of our new company software tool. Brittany loves monumental tasks: ‘When I set goals for myself, I reach for the moon!’

Her control center is her son’s bedroom where she is surrounded by cuddly toys and toy cars. Here, Brittany sets everything in motion and coordinates the activities of the Change Management team. Her actual workplace is the umlaut branch in Southfield, Michigan, a twenty-minute drive from Detroit. But for now, she works in a house on the outskirts of the city, in a sunny room with a sloped ceiling that turns into a cave for adventurers or a dreamland at night and is repurposed at sunrise into a temporary home office. Brittany’s desk sits by the window with a view of the garden. Next to her, a little blonde head emerges from underneath the bedsheets. Brittany’s son, Gus, bounces up onto her lap still half asleep.

As a manager, Brittany is caught trying to make the decision: Child or Career? ‘Or at least that’s the traditional mindset,’ she says. ‘As if I had to make a choice for one or the other. For a woman to have a career and children – that’s impossible, don’t even think about it.’ In Brittany’s life there is no either/or. ‘For my family, it was never a question of if, just a matter of how.’

Danny is a ‘stay-at-home Dad’, as Brittany tells us. He used to be an engineer and could be earning a lot of money doing so. He could have a successful corporate career and find fulfilment through his work. ‘But his ambitions lie elsewhere,’ Brittany smiles. ‘He was never really satisfied in his corporate job.’ She, on the other hand, is passionate about her work. ‘I love leading projects, setting challenges for my team, encouraging and supporting them,’ she says. Before she began working at umlaut, she completed her MBA in Grenoble, France, worked for InterNations in Munich, and was then discovered by umlaut during an internship at Detroit Diesel. That was six years ago. 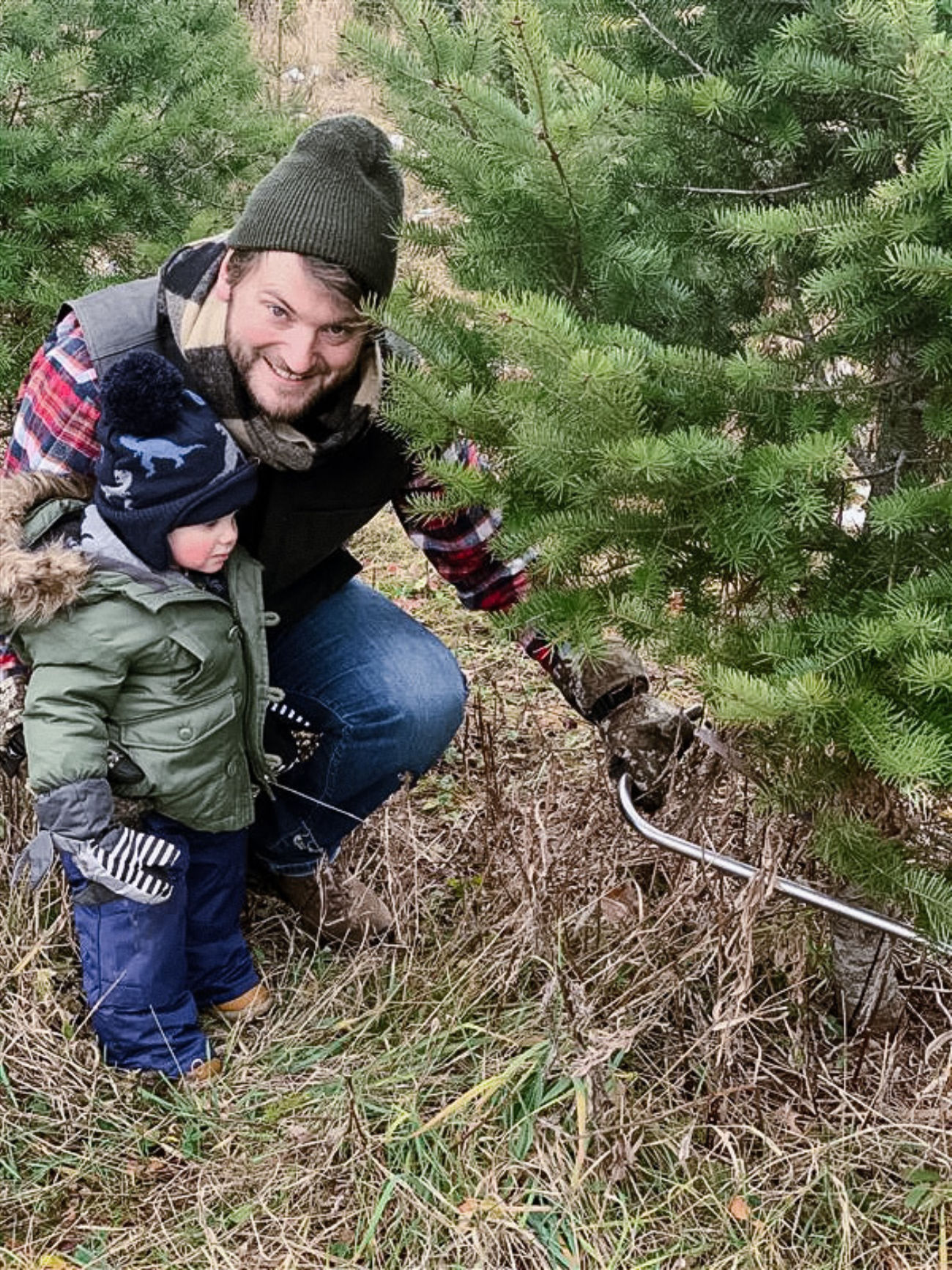 Her husband, Danny, is a ‘stay-at-home Dad’ and enjoys the quality time with his son.

Even before she got pregnant, she and her husband decided that he would take on the role of primary caregiver. After the birth of their son, Danny initially switched to a part-time position. Brittany stayed home for eight weeks before she returned to umlaut. She had paid maternity leave during this time, although this is quite unusual in the USA. Even today, there is still no provision for paid parental leave, no paid maternity leave. ‘This creates a huge problem for women,’ she emphasizes. Brittany and her husband found their own solution: Danny put in his two-week’s notice. ‘We decided that we would rather have less money and more time to spend with Gus,’ Brittany declares. Not everyone approved of this. ‘There are many people who shared their negative opinions: You aren’t a good mother. Or: Your husband isn’t a real man.’ This mindset is something Brittany hopes to change.

In order to show others how this can be done, Brittany wrote a children’s book, titled "Freckle Faced Gus and a Stay at Home Dad?”. In the book, there is a Mom who whizzes off to work in a spaceship. And a Dad who conjures up amazing adventures at home. And Gus, who sees both of them as superheroes. On the Internet, Brittany has become an advisor to women and mothers under the IG handle @pregnanttopromoted. In short videos or written texts, she talks about problems and her experiences as a working woman. And about how we can provide support to women in the workplace. She doesn’t want to be known as someone who just complains, she expresses. ‘I always tell my team: Don’t come to me with problems, bring the solutions, too! I have to practice what I preach.’ 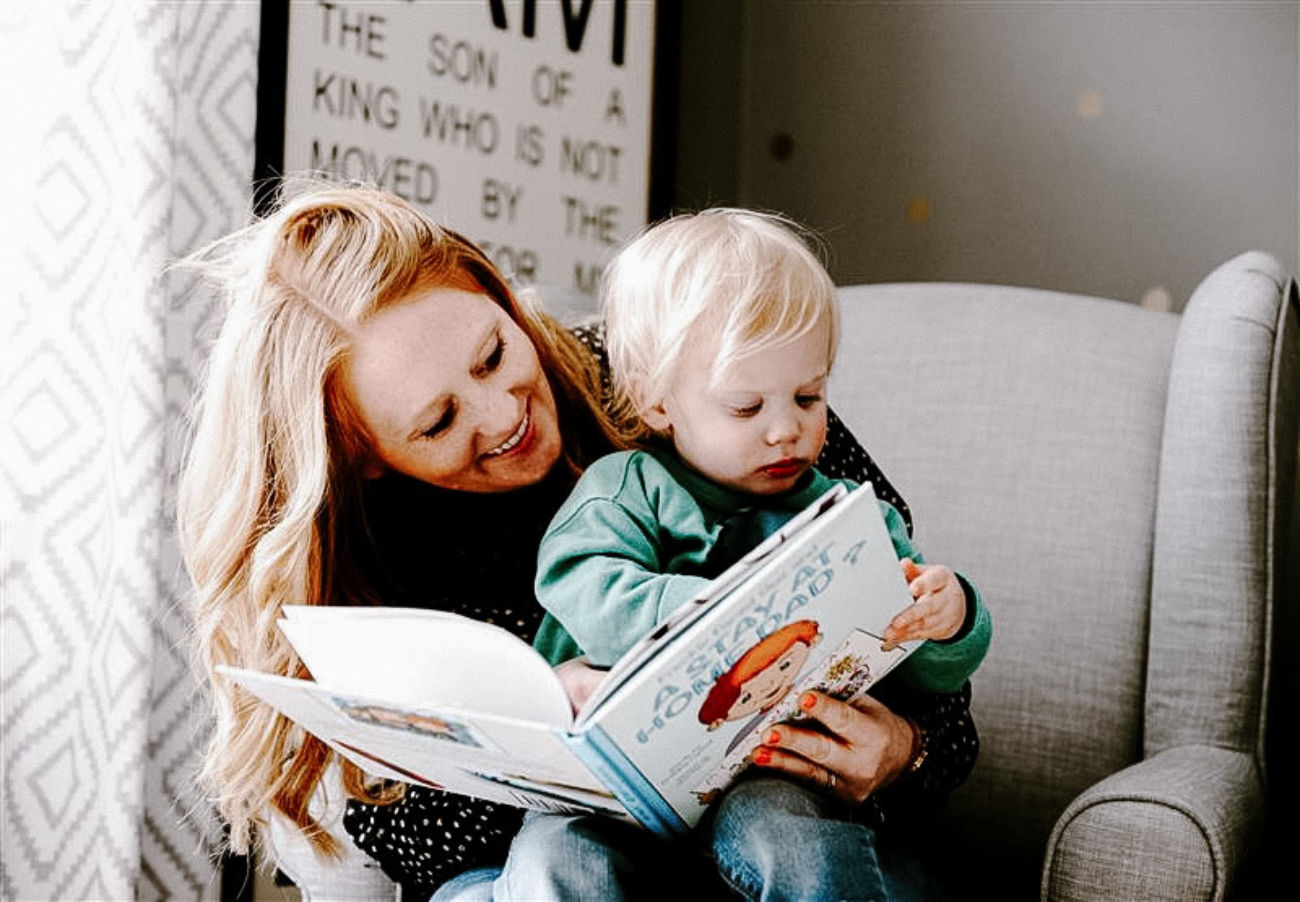 In her children's book, Brittany explains different work and life models to her son Gus.

She started her career off at umlaut as a project manager and was promoted after the birth of her son, first to Associate Principal, then to Head of Change Management for the ERP system implementation. Her recipe for success: Continuously demonstrate your value to your employers and communicate what is important to you. Women need to be open about specific measures that will help them manage both children and a career. She found it helpful to be able to take a more flexible approach to her workday. Around 4 pm, she usually closes her laptop for a few hours. ‘Then it’s family time.’ Later on, when Gus is asleep, she takes another look through her e-mails.

Her inbox is relatively full on this particular evening. The initial trial runs got off to a bumpy start. Not all the testers were properly prepared. And there were some issues with the technology, too. For the next few weeks, it will be a matter of making readjustments, realigning, and starting again. They only have six weeks left to fix any issues before they need to train 4,500 umlaut employees worldwide on this new ERP system. The timeline is quite ambitious. But we mustn’t forget that Brittany is someone who travels to work in a spaceship. ‘From experience, I know we will manage it in the end,’ she remarks.

In July, they will be going live for the first time. Then umlaut will be able to use the first functionalities of the tool. Further features will be added throughout the course of the year. ‘Standardizing over 150 working methods – that takes time,’ says Brittany. She is certain of one thing: for women who want to have both a career and children, the path is quite different - it isn’t a matter of finding one standard way to do it. There are many good ways. And she is testing out one of them herself. Brittany will not actually be there when the ERP system goes live, because she is also entering a critical phase in her private life. In just a few weeks’ time, she will be giving birth to her second son. She will be on maternity leave for eight weeks, or perhaps twelve. Then she plans to return to umlaut – as someone who can do both: be a good mother and an effective manager.