At home with solar panels, wood pellets and a Deutz tractor

Energy Manager Christian Gehring is making some modifications to his parents' house. If the energy transition is to succeed in companies, then it must be done on his own roof too.

Münster, four degrees, drizzly rain. The Deutz tractor stutters three times before Christian Gehring climbs down and fetches the starter spray from the petrol cabinet. He lifts up the bonnet of the D4006 diesel tractor, year of manufacture 1971. Two more manoeuvres and he has removed the air filter. A spurt of starter spray into the suction hose, the engine judders one final time and then springs to life. A cloud of black soot shrouds the garage, creating a dense fog. Christian confidently steers his agricultural machine out of the haze, and moves the fork lift at the rear backwards with pinpoint accuracy to place it under the fully loaded Euro-pallet. On it, there is a wooden crate containing firewood for the heating.

'The tractor runs on the last fossil fuel on the farm,' umlaut Manager for eMobility Christian tells us, and then corrects himself: 'if we don't count my parents' hybrid.' Christian lives here with his wife and two children. His parents live in the building next door. 'At the turn of the millennium, there was still a hen house and a pigsty here, as well as a couple of cows. Grandma and Grandpa used a Bullerjan stove to heat the house, and in winter you would hear the wind whistling through the clinker bricks. For a long time, they produced all their own food on the farm, selling any excess produce on the market in Münster.'

Although Christian does not continue to run his parents' farm, he drives it forward as an engineer with the future in mind!

Christian was quite sure that he didn't want to become a farmer and take over the farm. Instead he went to Dortmund, where he did a Master's degree in Industrial Engineering at the Technical University. Even back then during his degree course, it was clear to him and to his father that a turning point had been reached for the family farm.

Home as a real-life lab

Today, the land around the farm is leased out and the stables have been replaced by a pellet and sawn timber heating system and the garages that house the family's fleet of electric vehicles. Inside, there is an electric-powered Mini and a BMW X1 hybrid that belong to his parents. A Hyundai Kona, Christian's Tesla Model 3 and his son’s Rolly Trac play tractor are parked in front of the house. 'My parents were fans of electro-mobility and supporters of the energy transition from the very beginning. They decided to invest in a photovoltaic system and in electric vehicles. My wife and I took care of the renovation work on the house and did the groundwork for a more sustainable heating system,' he says.

The electric vehicles are also charged with the house-produced green energy.

Christian's home is becoming a personal testing station for the issues that he is dealing with at work. How can the customer make the switch from the old to the new world? What economic role will green energy play in the future? Which technologies seem to be promising, and when would it be a good time to invest? Currently, he is perfecting a strategy for a manufacturer of diesel engines for ships. The company is considering electrification. 'DC/DC transformers, inverters, switch boards and the like – now the key thing is to choose the right components to ensure success by 2040 or 2050,' says Christian.

Conveying knowledge, tackling key topics, coordinating jobs – these are things that Christian is good at. At umlaut he heads a team of several people. Together, they are drawing up the implementation scenario and developing the package of measures. The ship contract is apparently not really typical of their work. Normally, the Energy Team carry out requirements analyses, for example for charging systems, and work with the operators of charging infrastructure to push ahead with fast expansion and roll-out in Germany. 'Our experts working for example in power electronics look at the switching architecture of charging systems so that they can determine the best possible charging station for the intended application,' he says.

'We are all circling around the same experts'

Model calculations are part of Christian's job – and he also spends a lot of time trying to convince people. 'Just a few years ago, my biggest challenge was explaining to companies that the energy transition would take place in the automotive sector too,' he says. In 2013, he provided support for the market launch of the BMW i3. This was followed by the first Tesla Fighter programmes – this is what corporate groups call their studies, as they are aiming to compete with Tesla – and now companies such as VW and Daimler are also promising to turn their back on the combustion engine.

'The new challenge is to satisfy market demand,' says Christian. Energy providers are building the charging infrastructure, oil companies are also entering the market, automotive groups are creating their own infrastructure, as you can see with the example of Tesla or the consortium IONITY. 'They all need help and support when it comes to developing expertise, no one has the right staff. Whilst, only a few years ago, it tended to be engineers without any specific specialization who went into the automotive sector, nowadays it is electrical engineers – we are all circling around the same experts,' he says. The important thing now is to rely on the employees who started working in this area four or five years ago and turn them into trainers.

Conveying knowledge, tackling key topics, coordinating jobs – these are things that Christian is good at. At umlaut he heads a team of several people.

Christian is a strong advocate of the energy transition. His colleagues and customers soon realise this, as it is something he lives and breathes. Several times a week, he uses his Tesla to drive to the office in Aachen. With a fully charged battery and using an economical style of driving, he can get there and back without an issue. If an employer doesn't provide any charging infrastructure, the state provides a 70 euro flat-rate allowance per month. It's all too complicated for Christian's father-in-law; he prefers to stick to his combustion engine. 'The communications of the regulatory authorities are still a problem; for many people, the changeover to eMobility still involves too much bureaucracy,' says Christian. That's why he does his own calculations to try and convince his father-in-law: 'With his driving profile, he would pay around 75 euros in energy costs per month to charge the car – minus the flat-rate allowance for charging at home and including taxation for company cars of only 0.25 percent, this would result in a healthy amount of savings.' He has also worked out how much time could be saved in terms of driving to and from the petrol station, and plans to bring his calculations along to the next family meet-up.

It seems that, for most of the things he deals with, Christian has been through the calculations beforehand in Excel. But of course a prognosis can always turn out to be wrong. So it was with the pellet bunker. In the room next to the old party room, still with its beer pennants and wooden counter, Christian made space for a couple of hundred cubic metres of wood chips. Yet he doesn't need them, even in winter, when they have to use the heating a lot, as there is enough firewood stored on the farm to last them a couple of years. The new idea for the room: instead of feeding the excess electricity from the solar power system back into the grid, Christian plans in future to use it to power a heat pump, so that they can be fully self-sufficient in terms of heating. 'Calculated across the whole year, we only use 50 percent of the energy we produce, so there's still quite a large excess,' he says.

The autumn sun will be the next thing he needs to think about. From August onwards, the sun is no longer strong enough for the photovoltaic system to be used to capacity. 'If I change around a couple of the cells on the shed roof, it might just work. We have already prepared the wiring for it. It comes out of an area of lawn next to the Deutz garage and leads through a circular sawed hole directly next to one of the large tractor tyres.' Will it also be suitable for a wallbox so that they can charge the Deutz in future? Christian shrugs his shoulders and can't stop himself from grinning. 'Maybe conversion sets will become available one day. Then we will be well-prepared – after all, the family tractor will be staying!'

Christian is positive about the future and believes he will soon be completely self-sufficient in his home. 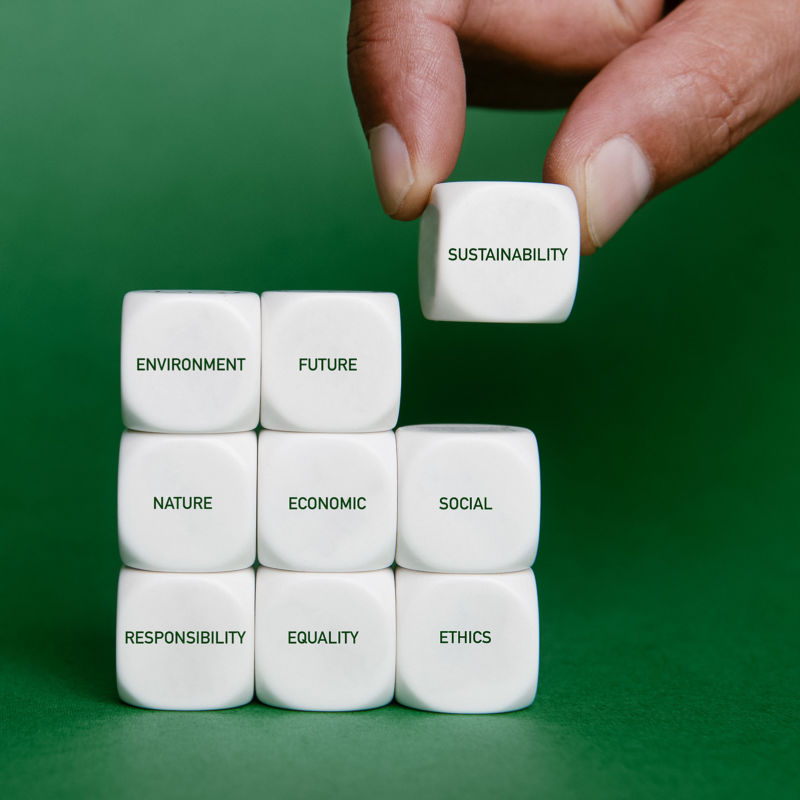 Sustainability: "In case of doubt, we let the customer go"

Jan-Markus Rödger and Lars Karsten are embedding a sustainable approach to business into umlaut’s corporate culture. This requires a lot of energy and sometimes costs them business. A commitment.

Jan-Markus Rödger and Lars Karsten are embedding a sustainable approach to business into umlaut’s corporate culture. This requires a lot of energy and sometimes costs them business. A commitment.

Find out more about our people 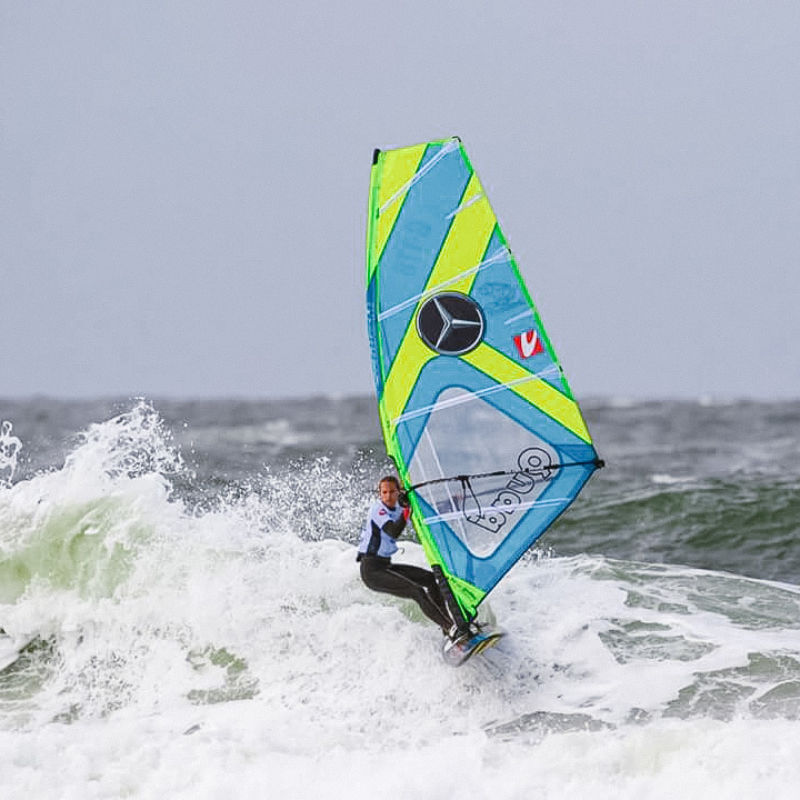 An instinct for picking the right wave

Caroline Weber is both a world-class windsurfer and a project manager at umlaut. Her secret: giving 110 percent – and then simply going with the flow.

Caroline Weber is both a world-class windsurfer and a project manager at umlaut. Her secret: giving 110 percent – and then simply going with the flow. 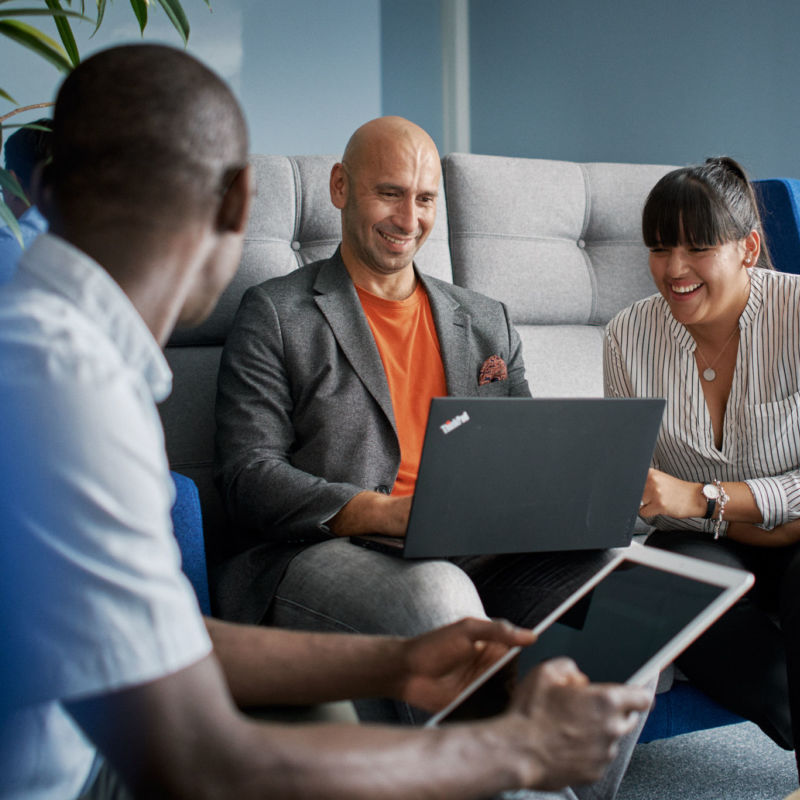